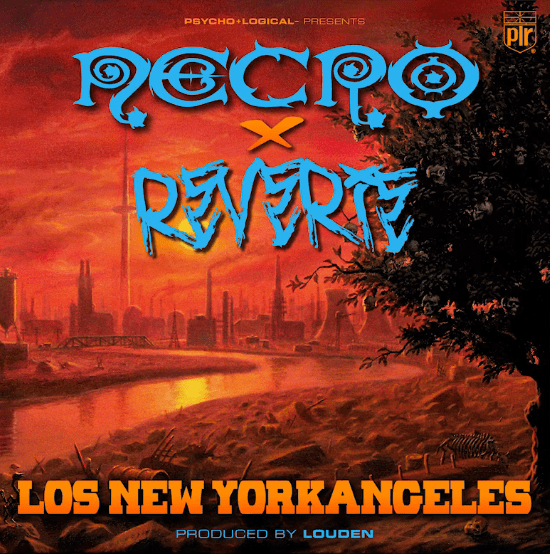 Necro from Brooklyn, New York & Reverie from Highland Park, Los Angeles, combine for the first time on this track, titled, “Los New Yorkangeles”, bringing an apocalyptic aggressive sound over this Louden produced beat. This is a monumental moment for Necro, as he has never recorded a song with a female MC, nor has he done a song with an artist from Los Angeles until now, considering LA is his biggest market. It’s about time, and it was worth the wait, as both MC’s go for the jugular vein and deliver a classic East Coast meets West Coast hiphop track. Reverie has been a fan of Necro for years, and even appeared with a cameo in his 2010, song/video, “The Kink Panther” when Necro was in town for the “Paid Dues” Festival performing. The title of the song, “Los New Yorkangeles” signifies the unity of both coasts on one track, as well as representing a new city after a nuclear war, as if both states had combined into one new state, the cover artwork reflects this concept visually.