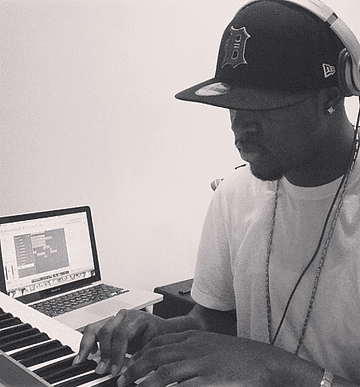 was born and raised in the streets of Detroit, MI. and also a proud native of the Inland Empire (I.E.) Fontana, California throughout his late teenage years. Now Deryck has taken his talents to the New Jersey,Philadelphia and New York Area. Yes The Different States has also gained a lot of inspiration to Deryck’s Creative process as a musician, Producer and songwriter from listening to different musicians and producers such as, J Dilla, Pete Rock, Dj Quik, Dr.Dre, Pharrell Williams and a lot more. He has also seen inspiration from the obstacles that life has thrown at him as a teenager throughout being in different parts of the world. Deryck is now currently A Full Time undergrad Online Student at Berklee College of Music, where he is currently living his dream in the out scurts of New York City.

Deryck recently received his specialist certification in Drums at Berklee College of Music in the year of 2012. Now Deryck is composing music for Local Acts, and also for TV shows and Major Movies. If you think he is just about the music, He is also growing into a successful business man at a young age as the founder and CEO of his own Record Company (Rhythm Avenew Entertainment) where his mom, (Terrie Rimson) serves as his first Artist. More artist that have signed with the label included hip hop group, Soul Official.  Follow him on Twitter & Facbook