Established as a reputable veteran music journalist, current Head of Artist Relations at Genius, Rob Markman embarks on his original dream of rocking stages in front of the limelight with the announcement of his debut EP and release of first single, “I Don’t Wanna Wait”.

While many industry insiders are familiar with the Brooklyn-native rhymeslaying origins, today, Markman announces to Hip-Hop his introduction into the game as an independent recording artist with his debut single, “I Don’t Wanna Wait”. The track is produced by J.U.S.T.I.C.E. League and features vocalist Kirby Maurier. On the track, the man behind interviews with many of Hip-Hop’s great plays close to the vest with lines of personal reflection and just the facts and not put words together just to match. A great kick-off track leading up to the upcoming EP release to quickly follow.

Earlier today, Markman sat down with Sway’s Universe in a surprise interview and announcement to discuss his reason for beginning his music career and often believing he could best majority of his interviewed recording artists in dueling wordplay. After releasing his debut, Markman also became the latest addition on Apple Music’s Breaking Hip-Hop playlist.

Won’t have to wait long for the announced EP from Rob Markman. Via Empire Distribution, Markman’s ‘Write to Dream’ EP will be available for streaming on July 28th.

Listen to “I Don’t Wanna Wait” below and then pre-order your copy of ‘Write A Dream’ today on Apple Music. 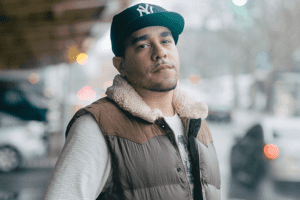