Reigning from Long Island, NY, Jus is here to make a statement – as if he hasn’t already… Opening for the likes of Ugly God and Lil Yatchy, a Damian Lillard co-sign, interviewing with Sway, and a feature on a track from Mally Mall,’s latest project, “Mally’s World, Vol. 1”, Jus has made a firm imprint on the NY hip- hop community.

“Pay Up,” a single from the project features Jus in the first verse, followed by Jeremih’s hook and verses from Tory Lanez and Vincent Berry II. 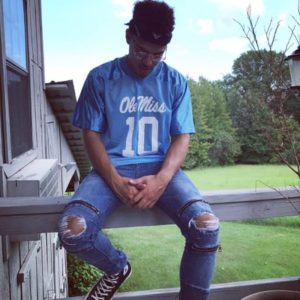 With all of these impressive collabs, Jus has been creating a authentic buzz for himself. Not only is Jus blessing the tri-state with his smooth cadence and consistent punch lines,  but he has also taken his warm, low frequency vox to SXSW and one of his personal favorite places to perform, Ole Mississippi University.

Jus has been growing a loyal fan base, where he interacts with them on socials often. Some of his fans have compared him sonically to Drake, J. Cole and Jay Z. Jus addressed these assessments in his top played song on Soundcloud, “Ivanka, prod. By Jaylon Emon.

Jus is definitely confident in his ability, but is humbled by his peers and those who came before him. It is clear we can hear some of his biggest influencers in his music, but Jus has creatively incorporated those into his own style.

If you’re looking for microwave hip-hop full of drug promotion, 808 driven tracks and tuned hooks, I would go elsewhere for your music.

Instead, Jus’ music takes you through his childhood, his life in college (recent graduate of Stony Brooke University), his experiences with his closest friends and family. He is loyal to those who support him, crediting his fans for all of his success. Jus is not here for the trends, but he’s here for longevity.

Justusraps is a must listen.

Check him out here: