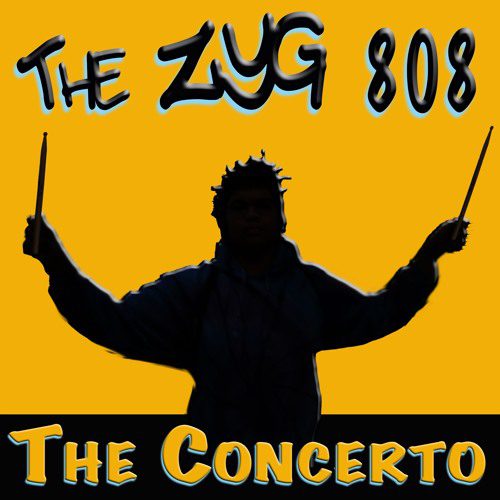 ZYG 808 is a world-class Hip-Hop/Jazz percussionist with an incredible gift for Spoken-word. Founding member of the established Soul Poet’s Syndicate, ZYG 808 breakout on his own and prepares for a big solo leap with his new album, creatively-titled, ‘The Concerto’. The Southcoast, Massachusetts buzzworthy recording artist is a man of many words and he hopes that you feel every one of them.

‘The Concerto’ is a 5-track introduction brought to you by Soul Poets Records/Liberation Multimedia. Presented with a music video for the title track, the project is built on exhibiting lyrical prowess and Jazzy construct. The necessary debut for ZYG to establish himself as a solo entity and prove that he is prepared to flourish as a marquee recording artist.

From a lyrical climate, ZYG 808 creates a coming hurricane as the lyrics spiral around with thought-provoking imagery and establishes the predictable tornado heading towards something massive. Recognizing himself not as a wordsmith who puts words together just to match, it’s identified that his skills disseminate because he focuses more on impact and meaning. ZYG is amazing at expressing emotion, using unique words and distinctive synonyms that have simple meaning but different execution.

While briefly explored, the production on the project is typecast behind his spoken words. Its gives out soothing energy and peace of mind, but the vibe fails to give us an extra helping with infectious instrumentals. The production lacks direction, while a short ride, it is random as ZYG shows his mixed emotions on the bars but the production is unable to navigate.

Perfectly compact for his solo mission, ZYG 808 has the premiere mechanics and techniques but misfires with the performance when it counts. His sound needs a personal touch where it has an expected touch. Textbook conscious lyricism, ZYG 808 manages to resonate with the production but is unable to become one with the music and deliver the feeling that fans receive when the music speaks to them. However, through discovery, we do see glimpses of greatness in ZYG, but for right now, he has simply a snazzy acquired taste.