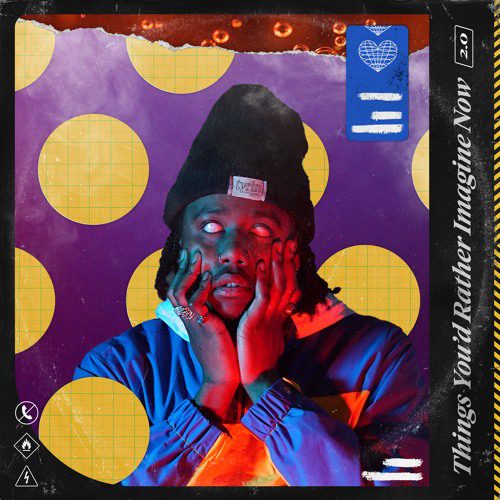 Some of the greatest music comes right in the midst of the spiral that a creative catches themselves in. Or a reflection for that matter. Brooklyn, NY native Tyrin has wrapped all of the feeling, emotion, and inventory of that last 2 years of his young adult life in his latest body work titled, “Things You’d Rather Imagine Now 2.0.” A rollercoaster ride of vibes, the project comes on the heels of his going solo after a stint with the Delivery Boys the ended in an amicably. A one man army since, Tyrin has teamed up with a collective of dope beat makers for his sophomore release.

The melodic kick off pace may lead to you some preconceived notions which I am not sure if Tyrin silences with the opening hook and Bridge for “Me.” A love song presumably, Tyrin harmonizes over the BenihanaBoy instrumental to no end. And there 3:29 have passed. “No Reply” breaks the monotony slightly as the BPMs become more familiar. Tyrin breaks down how he deals with rejection from a young lady who seemingly has switched the game up in the 9th inning. The remedy- more double cups. Definitely a fan of the ending bridge “I do not know why we are cutting ties – I’ll see you later no goodbyes. Makes me think of a couple of young ladies I would’ve recited this to many moons ago.

On another No Trust produced track, “First Place” Tyrin once again seems to strike out with a babe. Do you feel a theme building? On Hold Me Down, he rebounds well with a nice bounce as he is the one doing the dismissing this time around. “I’m not what you need baby, yeah this what you want passing off the trees baby you can’t fake the funk “ A party record full of red cup worthy lines the Goner produced track tips the scales back to the positive before you get to the second half of the tape.

“Everyday Feels like Monday” is a trip. To all my rock stars who do not need luggage, this is your anthem. A stand out record with a great knock, the lyrics are more than a vibe – they are law. Tyrin can we get a summer visual for this one? “Chemical Romance” is an elite offering to the stoner nation. “Wonder Why They Never Like Me” is a TL status waiting to happen for everyone who subscribes to the idea that if you don’t have any haters you ain’t poppin. Crack another back wood (or white paper) and roll up you’re going to need it. The project ends with “Show Me Love” a sharp contrast but return to the root of his concept which seems to be his desire to right the wrongs that have cost him some bomb women.

Love, friendship, disappointment, drugs and alcohol are the elements of the recipe for “Things You’d Rather Imagine Now 2.0.” Sounds like your vibe? Check it out now via all streaming platforms