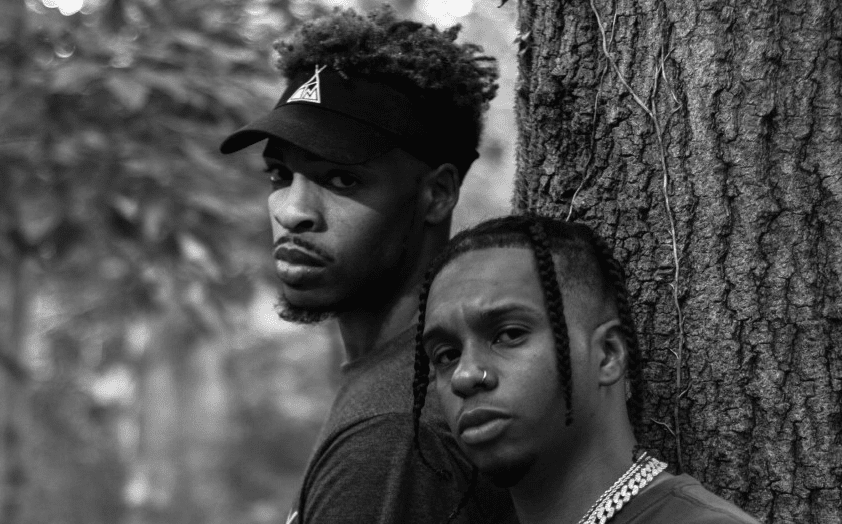 For all the readers who don’t know, give us some background on how Tribe Mafia was formed?

WIth our vision board setting itself into action, we (Chinasa Broxton and Carlos Moore) formed Tribe Mafia in hopes of becoming America’s next best hip hop duo.

We started our rap careers through the streaming platform, SoundCloud where we rapped our songs through cellphones all in one take. This taught us the value of patience when we finally started going to real studios. We learned how to accept failure and how to stay humble from the success that we have had thus far.

Before our big buzz, Tribe Mafia was known for being simple rappers. We then transformed into a bigger entity as we began to be headliners who sold out shows and arenas. We understand how maintaining an image and being humble plays in this business of entertainment. We know what it’s like to perform in front of only 3 friends or maybe even no one. We formed our brand by shaking hands and networking at every show we attended.

We can go on forever on how we’ve gotten to where we are now, but to keep it short and sweet, we’ve had to work our butts off! There were a lot of days where we would forget to eat or sleep because of how we committed we are in our music but we love what we are doing and wouldn’t trade it for anything.

How long have you been making music as a duo? Any specific influences?

As a duo, this would be our first year. Initially Tribe Mafia was a group of 4 but as the years passed by, our hunger for our pursuit in music didn’t reflect with the other two members, so we decided it would be best if we carried the name as a duo.

What city are you guys from? How is the Hip Hop scene there?

Tribe Mafia is from the capital of the lone star state of Austin, Texas. The Hip Hop scene is a work in process. Austin focuses more on the live music scene, such as Bluegrass Country and Rock, instead of Hip Hop. But other local artists like ourselves are gradually fixing that missing area of Hip Hop day after day.

What do fans want fans to take away when they listen to Tribe Mafia for the first time?

We want them to say “Dang, I hope they don’t change when they make it big, BIG.” If you ever listened to your favorite artist while they were underground, then you understand that bond. We hope we touch our first time listeners with excitement to keep wanting to listen to more Tribe Mafia music.

Congrats on your latest album “Teepee Gang“, we just completed a review for it and it’s dropping soon. Break down the album in a few words for us. Also, who designed the cover art?

Thank you! We are so excited to hear your thoughts. This project was designed to show our fans our hype songs with a blend of lyricism and a blend of mosh-pit high energy. We think the levels of energy on this project are well balanced and so far we have been receiving very great energy from our supporters.

The cover art for Teepee Gang was designed by @ArtsByPhilly on Instagram. We did a lot of back and forth communication on the art work. As a result, he ended up making the illustration for our cover art really cool.

So far, we’re seeing very high engagement with our songs “Teepee Gang,” “Triple Double,” “Ostracize,” and “Follow Me.” We’re getting a ton of dance videos tagged on Instagram, so we’re really happy with the direction it’s going. It feels good.

How many projects/albums do you have guys under your belt?

This year we have a total of three projects set to release:

What are a few different moves you’re making for 2020 when it comes to your music career?

We are focusing more on placements for television and movie soundtracks. We just landed a theme song soundtrack deal with a Netflix TV show called Tiger Kings for their next season. Our next mission is to land our song “Triple Double” on the new Space Jam 2 movie. Which is in consideration right now with the producers.

Any future collabs or projects you guys are working on for 2020?

In Texas, we definitely see ourselves trying to work with Lil Flip from Houston, Yella Beezy from Dallas, Khalid from El Paso, and Quin NFN from our hometown.

As far as projects we’re working on right now, our next Dancehall EP It’s a Tribe Ting, will have a bunch of famous indie artists such as DJ LA MOON, Sam Sage, Hitta Castro, Jay Honest and more.

Our highlight question, what is your definition of “indie hip hop”?

Freedom. No rules. Rebellion at its finest. Think of Young Thug before anybody knew him. When they first heard of him, they thought “oooh, why is he sounding like that” but now all we see are replicas of new artists biting his style. When we hear the word indie hip hop, our definition of that has to be “originality.” To set the bar as an indie hip hop artist, is to write your own path and love finding yourself while on the journey.

We would like to give a shout to all of the creatives who helped us orchestrate Teepee Gang.

Shout out to RJ MAINE, our personal engineer. He is also a prominent artist from Austin Texas and is featured on our last track on the LP “Ostracize.”

Shout out to Sam Sage, an engineer/artist from Puerto Rico. We got together with Sam Sage initially for our next project It’s a Tribe Ting. Sam really loves the genre of creating sad-emo vibes and we thought we should add him to our song “Teepee Gang” for our first ever rave, mosh pit style song. Check him out!

Shout out to Leekthough, he’s like a brother and business partner to us. He’s always looking for ways for us to elevate. He’s on the song “Follow Me,” our music video was shot in Las Vegas, directed by Daniel Castillo. We will be releasing visuals for the song “Follow Me” really soon. So be sure to check it!

Other shoutouts we have to mention, is to the team of KUTX THE BREAKS. Shout out to Confucius Jones and Aaron Fresh Knight. Before the cancellation of SXSW 2020, they had us on their official SXSW showcase. They are not only rap gurus on their public radio and podcast

show, but they are also mogul public figures in our city’s rap scene. Big shout out to them for considering us, and choosing us, we are forever grateful for them.