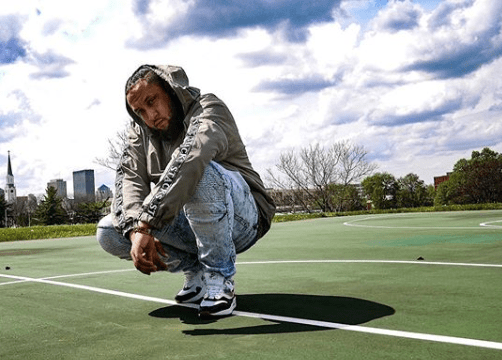 SleekoGotBars! We appreciate and love your true authenticity to the independent Hip Hop culture! Please tell us how many years have you been making music? Where are you from? Most importantly, how did you come up with your artist name?

That’s very much appreciated, I’ve been making music for as long as I can remember. I’ve been writing music since 7-8 years old and I’ve been in and out of the studio since 13 years old. Being from Dayton Ohio which is such a small market, everything has always been done “in-house” for the most part as far as production, engineering, artwork ideas, visual treatments etc. As far as the name SleekoGotBars, the nick name Sleeko came from a close friend who started calling me that in 2008-2009, Why? I couldn’t tell you other than the fact my government name is Rico and Sleeko was just a funny way to make it rhyme haha. I really used to hate the name but over time I embraced and once I embraced it everyone around me started calling me that. GotBars just came from being around more and more people as my reputation for “havin bars” grew, it kinda just became a thing.. “SleekoGotBars”

What separates you from all the other up and coming MC’s coming out of your city?

What separates me from a lot of other artists in general is my unique story and the fact that I have such a witty way of articulating my thoughts that even if you haven’t actually been through what I’m speaking on my delivery puts you in a place where you feel like you were there.

How are you coping with this whole Covid 19 situation? Has it delayed any new music production by any chance?

The covid situation is crazy because it has enabled me to be more creative in my free time with a lot of businesses still being shut down and what not but it has been a hindrance on me doing live shows with mandatory social distancing being in effect. I think this is a great time for artists such as myself to utilize our social media platforms, I’ve seen artist doing online concerts and things like that and I think it’s dope because if and when everything opens back up completely we will have more ways to put our talents on display.

You are extremely original and really put out a modern sound and style!!! Please tell us how you describe your sound?

It’s really hard to put a description on my sound because I make so many different types of records. I consider my music motivational music for the fact that I speak about every day struggles we go through in life but in doing so I come with a raw aggressive delivery that will make you wanna get up and either get some money or make the changes necessary to boss your life up! You can say I’m a chameleon, Every project I put out has a song for every mood and I’m always working on different types of records. The dope thing about me as an artist is the fact that not only do I make so many different types of records but I still manage to remain true to myself in the content.

Most of my musical influence stem from 1998 hot boyz/ no limit era all the way through the punchline Cassidy, Dipset, mixtape Wayne era. During that Time T.I. was my favorite rapper (probably my favorite rapper of all time) I was really inspired by his fearless persona and his aggressive and witty lyricism, not to mention Dj TOOMP being my favorite producer of all time. That rapper/producer combo was and is a heavy influence on a lot of my records till this day! I was also inspired by early Kanye, he gave us that soulful Midwest sound during that same era that the game was missing.

Please breakdown the creative process of your new album “God Bless the Real”. Tell us a little about the album cover!

The real inspiration behind God bless the real was losing one of my close friends I looked at like a little brother, his name was Jamarcus Morrow. He believed in me More than most and was supportive every step of the way while he was here! I recorded most of the records in the comfort of my home and the rest of the music with my engineer Christian Delemos. Shout out to him he was a major help on some of the records melody wise as well! Not only the fact my young homie Jamarcus passed but that the fact that over the years the city of Dayton as a whole has suffered many losses that hurt our community in a major way I just felt like someone needed to step up and create a soundtrack to aid in the healing process! In 2019 We were the victims of not only a tornado that caused mass destruction that caused many to lose homes and possessions but also a mass shooting that hit us really hard as a whole! Major shout out to Dave Chappelle for being a real one and putting together a concert that brought out thousands of grieving folks to have a day of celebration for those we lost! As far as the cover for God Bless The Real I actually took the original picture in front of an old retail store that closed down in my city and a representative of mine came with the idea to make the pillars look almost like a mural of the things that mean the most to me which is family there were a lot of folks missing but we could only fit so many!

I have three! “What would it take” just for the fact it’s my favorite song of mine to ride to, “Big Face Hunnids” for the fact it was my favorite song to record “God Bless The Real” would have to be my third choice for the simple fact that it was the title track but the fact that it brought the album together full circle and represent where I was trying to go with the content the most. I did the album for the city of Dayton and other cities worldwide suffering like us.

Rappers nowadays think by throwing up a few videos up on social media and pushing quick projects, they can blow up overnight! Give us your view on how over saturated the market is right now with so many MC’s/Producers but not too many quality music.

I definitely hate the fact there are so many artist now. I remember the days when there were very few folks trying to be a rapper, singer, model, etc. I think with everyone being on social media and attention thirst being at an all-time high it’s kind of taken away from those who truly have a passion for creating because now ANYONE can do it. Back in the day resources were limited and you had to really be connected to get things done but now everything is at the tip of your fingers. Although it’s a blessing to be able to present yourself so easily nowadays it also has its cons because that just means more people doing what you do even if they don’t share the same passion. I don’t let it affect me because I know my music stands alone amongst other artists. I believe there’s a lot of artist with potential that have the LOVE for the game but its overshadowed by a lot of folks who really just want some IG clout.

If it came down to 1 ALBUM only, what underground/independent Hip Hop album would you guys consider THE BEST OF ALL TIME!!!???……One 1 album you can choose.

So many classics and I’m gonna name mixtapes as well. you got Kevin Gates “Luca Brasi”, Wiz Khalifa “Kush and OJ, Starlito “At war with myself”, Big Krit “krit was here”, I can name multiple Lil Wayne mixtapes. This is a question where there are just way too many to name haha.. But yea “GOD BLESS THE REAL” haha… Seriously though.

We have to ask, with all this social discourse and revolt, protesting and rioting, exposed police brutality toward blacks and BLM, how do you guys feel about this? We would love your perspective on the climate we are living in.

I think the protesting, rioting etc is all very necessary. I think Black folks are finally at that breaking point and we are sick and tired of police killing us and the system washing their hands with it. We have tried for years to peacefully protest and peacefully speak out on it. For instance Colin Kaepernick took a knee during the national anthem and they blackballed him and kept him out of the league and made it about something it wasn’t even about! He wasn’t kneeling to disrespect the flag or the veterans that served our country but that was his way of shedding light on police brutality but they didn’t want to acknowledge that. Obviously over the years this has STILL BEEN a reoccurring thing. I think the death of George Floyd (rest in peace) was just that breaking point where Black people were like ok we’ve spoke out peacefully now we act with force and Im not against it at all. So many people in this country choose not to see the evils of this country. I feel people in power who have the ability to make systematic change ignore peaceful protest. So when you impact them financially from rioting, looting or controlling your buying power then things seem to start changing and those who are blinded will begin to see and feel our pain.