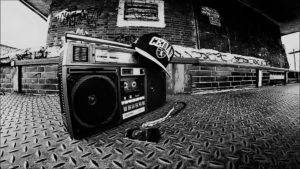 Growing up in the ’80s and ’90s, we had some very genuine sounds that left a very big impression. Many of the Hip Hop artists of that era had fun songs, and the beats were so hard to get out of your head. In the mid and late ‘90s, Hip Hop began to incorporate more violence, degrading the opposite sex, talking about drugs, etc. Now don’t get me wrong, the beats were still there, inspiring some great artists later on down the road.

I most definitely like the old school better, for the artistic way they rose above their situation and were overcomers. To me, today’s Hip Hop tells more of a story from the artists’ struggle and how they rose above hardship. This gives many an inside look at the way people are treated, what is excepted, and who can be the next LL Cool J, Run DMC, Beastie Boys, etc.

A style that’s not really new, but different has come into the light even more…Country Hip Hop (aka; Hick-hop). Many new artists are coming to the forefront, including Adam Calhoun, Ryan Upchurch, and Mesus, just to name a few. Now the older country Hip Hop artists may surprise you. Kid Rock “Cowboy”, Cowboy Troy, and Nelly are just the tip of the iceberg. Country Rap really got its start in the early ‘80s.

Hip Hop flows over into all other genres, including rock, country, pop, metal, and Christian. Christian Hip Hop has really taken off within the last 15 years, especially Toby Mac, Lecrae, and Da’ T.R.U.T.H., for starters. Some famous rappers are changing their lives and coming over to Christian rap. Kayne West has been the most notable. Kayne announced that he wanted to start rapping for Jesus. This is a change in which many people were very cautious, and did not believe Kayne would do such a thing. Now many people are listening and have more respect for his decision.

In this era or style of Hip Hop, I see more battle rap styles or battle beef going on. Things tend to get very personal towards each other. One artist that many tend to shy away from is none other than the G.O.A.T. himself, Eminem. Marshall Mathers has cut careers short, because of his wordplay and his manipulation of words. That is not to say that others are bad at rap battling, Eminem is just really great at how he deconstructs whoever is in his sight. As Mathers has stated about those who helped shape his career, today Eminem is helping shape careers.

Now as far as where I would like to aim my focus, that would be more towards the Country Hip Hop. I would like to see this style of rap more in the spotlight showcasing its artists. Many styles of Country Hip Hop (Hick-hop) are starting to appear but for the most part, many stay close to their roots. Country Hip hop has gained quite a following in the last two or three years. I believe this will only grow and many understand that in Country Hip Hop, life can be just as tough. Drinking, drugs, and much of the other things in Hip Hop do not just affect the inner cities. Yes, most Country Hip Hop artists are country folks. However, that does not mean they just listen to country music. Many have been influenced by some of the same artists such as Eminem, LL Cool J, 50cent, and many more.

If you have not had the chance or even thought about listening to Country Hip Hop, do so now. You may find that you have quite a lot in common with these artists. Again, just to name a few; check out Adam Calhoun, Ryan Upchurch, or Mesus (just off the top of my head). Yes, they do sound country, because they do not live in the big cities. Open up your mind, listen to the words, and the beat. You will find yourself very impressed and wanting to hear more. However, do not just listen to one song, listen to multiple then form your opinion. Now come on back Y’all, you’re always welcome.