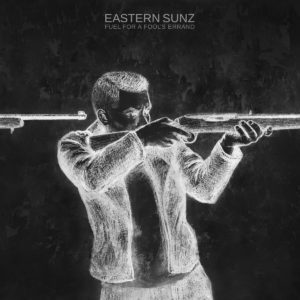 Eastern Sunz are one of the best independent duos out there right now. With a plethora of awards and critical acclaim, the group has received major recognition from many industry titans. Their newest release is titled “Fuel For A Food’s Errand” and It is their most ambitious and star-studded project yet.

Lyrically, the Portland mcs chemistry is seamless at this point. The relevant political and social commentary makes up most of the content on the project. In addition, Eastern Sunz articulate their words to make almost every phrase feel emotionally moving and powerful. Songs like “Perpetual Spectacle” and “Bad News Bearers” display the two’s ability to exchange bars with ease. In addition to their talented lyrical ability, songs like “Mission Committed” and “Dollarticians” with the legendary Ras Kass show off the group’s ability to successfully test and implement different styles. “The Last Sunset” is a definite standout on the album as the duo dives deep into the principles of the universe and humanity as a whole. Having such a wide array of styles and subject matter is a rare combination but, Eastern Sunz does it with ease as they go in extreme depth while they unravel their minds.

Sonically, Sunz blend an array of styles with their native roots. Having a star-studded team of producers including the renowned Smoke M2d6 the instrumentals add so many more layers to this already great album. Beats on the tracks “Welfare” and “Perpetual Spectacle” have a classic feel while records like “The Last Sunset” and “Breathe” feel epic and life-changing. Each instrumental brings something new to the table as they all serve as the soundtrack for the stories Eastern Sunz are trying to tell. Overall, the production does a flawless job of making a dynamic and unforgettable experience for the listeners.

Looking at the big picture, this record is the best thing I have reviewed on this site. The blend of conscious lyricism with stellar production is phenomenal and breathtaking at times. Both artists do their part and all of the feature performances feel well placed as they add something to the respective tracks they appear on. I recommend Fuel For a Fool’s Errand to any hip hop fan as it executes everything a great album needs to the max.