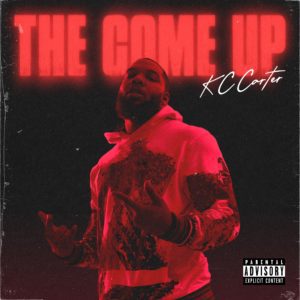 KC Carter is a rising rapper from hip hops current hot zone Atlanta, Georgia. His newest album is titled “The Come Up”. Evident in the name, the project focuses on Carter’s desire to make it in the music industry. The record displays KC’s versatility, which creates an enjoyable ride for anyone listening.

Hunger, aggression, and the desire to be great make KC Carter’s performance unlike no other. From the intro track “Run It Up”, we see Carter rap like his back is against the wall. Songs like “I Made It” and “Ball Out” serve as motivational hype up anthems. A definite standout is “Genesis”, as it shows a more introspective side to KC. The rest of the album builds upon the previously listed themes as KC scorches the microphone. Towards the project’s finale, the cuts “Ground Up” and “Rise Up” tie the entire album together as Carter uses his pain and failures to empower the listener. Overall, it doesn’t get more inspirational then KC Carter’s performance on The Come Up.

Sonically, The Come Up’s production matches KC’s high energy. Mostly consisting of hard-hitting epic tunes, it is hard not to feel riled up while absorbing the records sonic side. The tracks “Rise Up” and “Ball Out” are exemplify this with there emotionally moving beats. One of my favorite instrumentals is seen on the track “The Best There Ever Was”, as its spacey atmosphere masterfully compliments KC’s vocals. As a whole, what was done behind the boards further strengthens The Come Up’s narrative.

In conclusion, The Come Up is an astounding addition to the catalog of KC Carter. Fast flows, vulnerability, and vibrant production make this record super accessible to most rap fans. My only gripes with the album is the slight overuse of autotune and the lack of any true depth. Going forward, I can’t wait to see how KC Carter develops his skillset, and if you are too sure to follow @ktothecizzle on Instagram!