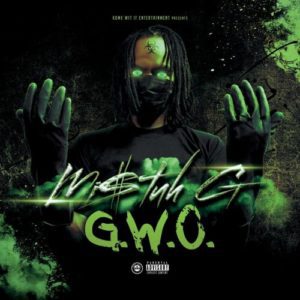 Mi$tuh G is a rising rapper from Sacramento, California. After establishing a name for himself in the underground scene with his “G Files” project, fans have been waiting to see where the young mcs artistic vision will guide him. His newest project “G.W.O.” has been fueled by the coronavirus pandemic and the recent racial tensions which have flared up due to the unjust death of George Floyd. Being able to cover such gruesome topics cohesively is a hard task yet, Mi$tuh makes it look simple.

Mi$tuh G gives his commentary on America in a refreshing way. The track “Apokalypse” is a great welcoming to the rest of the ep as G paints a vivid picture of our crumbling world. For the rest of the project, G goes on a lyrical barrage furthering the subjects talked about in the intro. Songs like “Keep” and “Trap Drill” show Mi$tuh’s top tier lyrical ability as he taps into many different flows and pockets. The content on the ep is especially potent on the cuts “G World Order” and “Riot” as he goes into depth about the detriment that the coronavirus has had on the youth and the terror Floyd’s death has had on our nation. Overall, Mi$tuh G’s culmination of politically and socially aware lyricism makes “G.W.O.” stick out from most projects in the underground.

Sonically, the production on the record matches the explosive feel of G’s pen game. A nice touch that enhances the ep is the placement of various recent news clips between and before tracks. Songs like “Heard” and “Kreep” contain hardcore beats while the cuts “G World Order” and “Disconnect the Doubt” have a more dramatic and introspective sound. My favorite instrumental on the entire record is “Trap Dill” as the chilling background vocals and the hard-hitting drums embody everything G.W.O. is about. There’s really nothing to complain about as the instrumentals on the album create the perfect soundtrack for Mi$tuh G to rap over.

In conclusion, G.W.O. is a polarizing second statement from Mi$tuh G. With his technically profound lyricism, the album is pure food for thought as he goes into depth on enduring issues. My only gripe with the album was the underwhelming feature performances. Going forward, I’m super excited to see what this gifted young rapper does in the future as his skill set is already exceptionally developed.  Make sure to follow him on Instagram @mistuhgkwi.