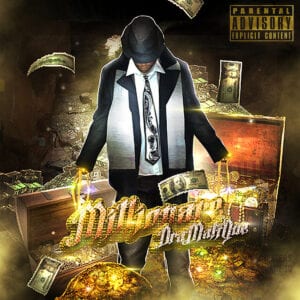 DraMatiQue is a rising rapper from Sacramento, California. After releasing a series of popular mixtapes, he has finally released his debut studio album titled “Millionaire”. Blending classic, street, and trip-hop together Dra intends for this project to show off his multifaceted skill set. On the biggest stage of his career, will DraMatiQue continue to expand his ever-growing name?

Being an elite MC who can also sink his feet into some experimental territory, DraMatiQue shows he is one of the most desirable rappers in one of hip hop hottest areas. Songs like “Hangin’ On” and “Who Really Want It” show Dra’s fearlessness when it comes to experimenting with his voice and pitch, and it feels rewarding to hear when its triumphant. While mostly paying off, there are times when his bravery can feel awkward such as the off-kilter signing on “Why We Rock (Intro)”. With that said, the potency embedded in each bar he spits makes nearly every song have some sort of message. From the hard-hitting “Wake Up Call” to the victorious “Champion”, Que’s blood, sweat, and tears are embedded in his craft. “My Barz” was a definite standout as DraMatiQue goes on a lyrical tangent on his legitimacy as an MC in the rap game. As a whole, the velocity of ideas, talent, and lyricism seen from DraMatiQue proves he is ready for the limelight.

Behind the boards, the soundtrack backing DraMatiQue’s vocals matches his well-rounded style. While none of the beats are barrier-breaking, they all fulfill their job of complementing Dra’s style to the best they can. “Why We Rock (Intro)” was a definite standout as its rock-oriented sound is intriguing to hear. Continuing to branch out, the more electro based songs like “Anxiety”, “Money Makerz” and “Who Really Want It” brings out a more charged upside of DraMatiQue due to the suspense and energy they draw in. Moving towards the safer side of things, cuts like “My Barz” and “Millionaire” contain some more grounded instrumentals that you would see your run of the mill street rapper use. While they’re definitely not as impressive, they are formidable at the least. Overall, the only problem sonically is that a fair share of songs sounds like they were curated a decade or even longer ago, making it feel like you’re listening to an already stale project.

In conclusion, “Millionaire” is a solid debut from an artist who is only a top-notch production team away from reaching the next level. DraMatiQue is one of the most well-rounded artists I’ve heard all year as he is brave, powerful, and skillful all at once. Going forward, I hope Dra takes this criticism to heart and uses them to make his next offering the best it can be. If you’re like me and want to see what this talented up and comer does next, be sure to follow @dramati2ue on Instagram!